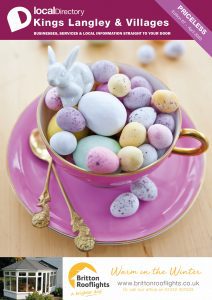 Kings Langley & Villages was launch in April 2020 in a reboot of the magazine that increased its coverage area.

Kings Langley is a bustling and popular village nestled exactly half way between Hemel Hempstead two miles (3.2km) to the north and Watford two miles (3.2km) to the south. The original name “Langelai” was recorded in the Doomsday book and means ‘long wood or clearing’. It was once the location of Kings Langley Palace, a royal palace of the Plantagenet kings of England.

During the Second World War, the village was home to the secret headquarters in Britain of the Polish Underground army based at Barnes Lodge just off Hempstead Road near Rucklers Lane. Kings Langley was once also the site of the factory making Ovaltine, which has now been converted into a series of flats and apartments, the art deco façade being all that remains of the original building.

Kings Langley found a small slice of fame when for a week in February 2014 it changed its name to “Kings Landing” in honour of the highly popular TV series Game Of Thrones. The idea reportedly came about after a producer of the HBO hit mis-heard Kings Langley being announced as King’s Landing while waiting at Euston station!

This edition of Local Directory also covers the nearby Hemel Hempstead suburb of Apsley, a 19th century mill village, now a historic industrial site and one-time location of water mills serving local agriculture and the famous Dickinson Paper Mill (now closed). The nearby Grand Union Canal provided an easy way of transporting the raw and manufactured products to and from the mills. The Frogmore Paper Mill is still a working paper mill with a  visitor centre located in some of the original mill buildings. It is the oldest surviving mechanical paper mill in the world and also serves as the site for the Apsley Paper Trail.

The Kings Langley & Villages edition of Local Directory is distributed to homes in the HP3, HP4 and WD4 postal area which includes:

Our rates are excellent value and we offer some great packages for long-term advertisers. All directories are published monthly in A5 format. A quarter page ad costs as little as £68 per month (based on 13 months booking in 3 magazines) – in full colour!

By continuing to browse the site you are agreeing to our use of cookies.