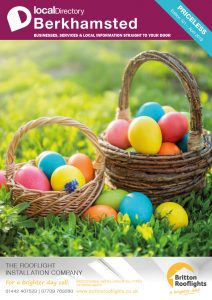 BERKHAMSTED is a historic market town situated in west Hertfordshire between the towns of Tring and Hemel Hempstead. It is a civil parish with a designated Town Council within the administrative district and borough of Dacorum and one of the Local Directory’s three Hertfordshire titles.

It is rich in history; in 1066 William the Conqueror was crowned King of England in the town’s motte and bailey castle, which remains one of the oldest surviving castles in England today. There’s an abundance of blue plaques on the high street’s listed buildings with several 14th and 15th century coaching inns and the impressive 12th century St Peter’s Church, where the Black Prince is entombed. It is home to England’s very first high street shop unit, currently operating as an estate agent and home to one of the country’s oldest schools, Berkhamsted (private) School originally founded in 1541 by Dean John Incent and the slightly younger Ashlyns (state) School, founded by Thomas Coram in 1739, originally as a home for orphan foundlings.

The town has an award-winning restored art-deco cinema, a thriving street market every Wednesday and Saturday, and a monthly visiting French and Italian food market. There’s a bustling high street of independent, individual and familiar stores, and the town is fast becoming known for its culinary and gastro food outlets and eateries.

The completion of the Grand Union canal in 1798 established Berkhamsted’s important trading links to London during the last two centuries; it remains a popular feature of the town today.

Situated just 25 miles (40km) northwest of London, Berkhamsted is a thriving commuter town thanks largely to its excellent road links: the M25, M1 and M40 via the A41, are less than 10 minutes away, whilst its rail links take you to central London (Euston) in just 35 minutes.

The Berkhamsted Local Directory was the fourth magazine to be launched in 2010. It is distributed in the HP4 area which include:

Our rates are excellent value and we offer some great packages for long-term advertisers. All directories are published monthly in A5 format. A quarter page ad costs as little as £68 per month (based on 12 months booking in 3 magazines) – in full colour!

We use cookies on our website to give you the most relevant experience by remembering your preferences and repeat visits. By clicking “Accept All”, you consent to the use of ALL the cookies. However, you may visit "Cookie Settings" to provide a controlled consent.
Cookie SettingsAccept All
Manage consent

This website uses cookies to improve your experience while you navigate through the website. Out of these, the cookies that are categorized as necessary are stored on your browser as they are essential for the working of basic functionalities of the website. We also use third-party cookies that help us analyze and understand how you use this website. These cookies will be stored in your browser only with your consent. You also have the option to opt-out of these cookies. But opting out of some of these cookies may affect your browsing experience.
Necessary Always Enabled
Necessary cookies are absolutely essential for the website to function properly. These cookies ensure basic functionalities and security features of the website, anonymously.
Functional
Functional cookies help to perform certain functionalities like sharing the content of the website on social media platforms, collect feedbacks, and other third-party features.
Performance
Performance cookies are used to understand and analyze the key performance indexes of the website which helps in delivering a better user experience for the visitors.
Analytics
Analytical cookies are used to understand how visitors interact with the website. These cookies help provide information on metrics the number of visitors, bounce rate, traffic source, etc.
Advertisement
Advertisement cookies are used to provide visitors with relevant ads and marketing campaigns. These cookies track visitors across websites and collect information to provide customized ads.
Others
Other uncategorized cookies are those that are being analyzed and have not been classified into a category as yet.
SAVE & ACCEPT
X
X